Rising Storm 2 – a real classic in the genre 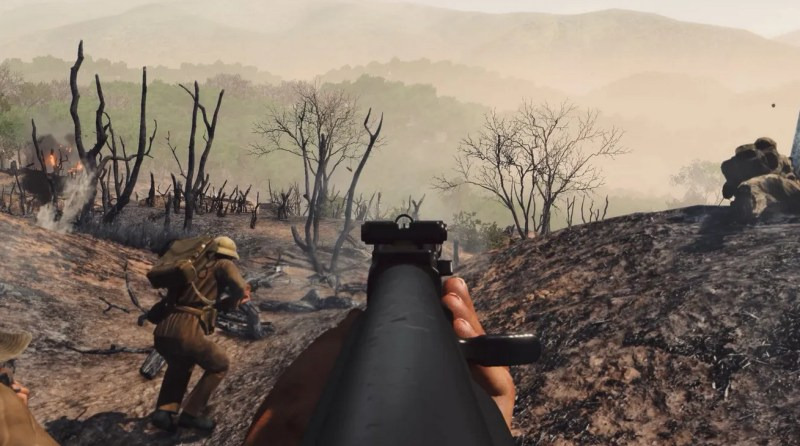 Have you played Rising Storm 2? What do we actually know about the Vietnam War? It is an event shrouded in political and military secrets that has ruined the lives of many young boys. The books and films about this war, unlike other genres, do not talk about heroism, feats and brave deeds, but only about young boys, arrogance of the command, madness and complete absurdity of what is happening on and off the battlefield.

Most of the great anti-war films tell us about Vietnam for the reason that this war is the most anti-war. Who is fighting? What is he fighting for? Who is he fighting? Why fight? This is briefly discussed in the historical background. Yes, we know you’re not here for a history lesson, you just came to read a review. But without a historical background, the mood of the game cannot be conveyed.

Without going into a detailed historical background, the Vietnam War can be described as follows – American troops tried to fight guerrillas in friendly territory and it became so difficult to distinguish an ordinary peasant from an enemy soldier. And it is not a fact that the villagers do not cooperate with the neighboring country.

There was complete confusion on the battlefield, the soldiers did not understand with whom and how to fight. This alignment created constant chaos for American troops, even if they did not want to do anything wrong. American distrust of the people they were supposed to defend was mutual. A mother with a child could approach a soldier and detonate a grenade hidden in the baby’s diaper. Then what kind of trust can we talk about? In the end, the Americans failed to defeat the Communists, and they left Vietnam in disgrace. The reason for their loss is quite simple – you can’t protect someone when you can’t tell them apart from the enemy.

See also  How to follow the WPC2027 live: a comprehensive guide Register & Login

The game uses the one hundred percent setting. Napalm strikes, screaming soldiers, the decorations worked out to the smallest detail and the music immerse the player in the mood of this stupid war and do not let him go until he himself leaves the game.

The developers brilliantly managed to convey a sense of both the horrors of war and its absurdity thanks to the ironic or sometimes idiotic cries of the soldiers.

They themselves do not know what they are fighting for and what is happening turns into a farce when you “complain” to your partner and immediately burst out laughing, pouring napalm on the crowds of Viet Cong. The horrors of war are reflected in truly horrific battle scenes – the suffering of dying soldiers is shown in great detail. When you shoot a stream of napalm through the window of a small house where the guerrillas have settled, you will hear the heartbreaking screams of the soldiers, not the epic speaker of the murder series.

The developers have added a detailed system for customizing the soldier, which is full of references and references. You are free to create even a simple Joker from Stanley Kubrick’s Full Metal Jacket, even Colonel Kilgore from Apocalypse now to Francis Ford Coppola.

It is worth saying a few words about the community Rising Storm 2: Vietnam. Playing without friends is fun because the community is crazy about Vietnamese. Once you log in to the Viet Cong server, you can safely win the Viet Cong and no one will say a bad word to you. On Australian cards, almost every player with a microphone turns into an Australian redhead, and American soldiers light up with napalm. But this does not mean that these guys are inadequate – teamwork, at least in the team, is more than possible to build. Rising Storm 2: Vietnam is a purely multiplayer shooter, and very hardcore.

Each class has its own purpose. For example, the radio operator is one of the most important figures. He must stay close to the commander throughout the match and also not want trouble. The destroyer must dig up already captured points, and the captain of the squad must not die so that the allies can revive on it. It is also worth noting that the abilities of each of the two countries are different. If American soldiers can call up napalm, then Viet Kong can call in Soviet planes to shoot at American soldiers. If the American bomber has a mine, then the Viet Cong has a cable connection. The parties to the conflict have different weapons, vehicles and styles of play. The American quickly licks his wounds, and the Viet Cong moves better in the bushes.

Minimum interface – Tripwire does not change its canons. You also have the option to turn it off. Players move not by the headshot distributor sitting inside them, but by pure instinct for self-preservation. The main thing here is not to fill a high k / d, but to live and move the front forward. Complex shooting and huge cards make the skirmishes neat and long, and close fights rarely end in anything good. The match goes from cover to cover and the tension does not subside for a second.

The weapons in the game are amazing. Each gun is felt and fired differently. The barrels have a noticeable weight, which makes shooting at them a pleasure. Strong recoil, weak soldier’s hands – the recipe for excellent shooting is simple. After each shot, a light stream of smoke comes out of the barrel, and the barrel itself looks the other way. The animations for reloading, rocking the shutter and shooting are amazingly executed. Such a bias in realism may not be to everyone’s liking. Tripwire’s obsession with realism made shooting random and chaotic.

Great game mechanics, average graphics and an amazing feeling of setting at your fingertips.