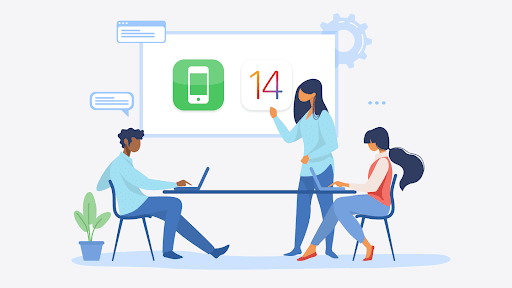 The creation of mobile applications is becoming more and more popular and in demand among enterprises worldwide. For the past ten years, Android and iOS have held sway over the world. In 2021, India’s tech sector had significant growth. Modern mobile apps are in high demand across a variety of industries due to the pandemic including professional services, education, healthcare, financial services, and more. The use of the most recent technologies is greatly influenced by mobile app development companies.

These businesses intend to use the top apps on Android and iOS devices with the smooth implementation of their IT support. Numerous businesses offer mobile app development services based on your needs. The top app development businesses can code for iOS, Android, and Windows Mobile, or go cross-platform and design a hybrid app. This can save you time from potentially tedious online research. Their quality of UX/UI design as well as their openness to experimenting with cutting-edge technologies including wearables, augmented reality, virtual reality, blockchain, Amazon Alexa, and conversational bots is noteworthy.

There are four types of app developers with specifications in their domain. The first type is Enterprise level. This type of developer’s cost is relatively more and can provide the strongest support in the journey of developing an app. This enterprise level is again divided into 2 types namely in-house & outsource. In the in-house enterprise type, there are big companies that are involved in it. They hire employees for designing, developing, and testing purposes. And on the contrary, in the outsource enterprise type, you hire freelancers instead of employees. The 3rd type is boutiques in which the team of developers is very small (team of 2-3 persons). And the final type is freelancers who have a specified level of expertise in that domain.

Enterprise(in-house): In this type of app developers are costly to hire for development. But the chances of creating an app very quickly are highest amongst others.

Enterprise(outsource): Here outsourcing is the key. You can simply outsource any subtask or full task to any outsourcing company. This is comparatively cheaper than building a in-house team of developers and also more reliable than the next categories.

Boutiques: These represent the small group of developers. It can be up to 2-3 people in a group. This type can also include a team of developers who have expertise in a specific domain.

Freelancers:  Here the work is supposed to be done only through freelancers which means they are not strictly bound to do any addition after completing the project. So this option is not impossible if we want to create a fully working app but this option comes with the factor of the uncertainty of completion of the project.

The duopoly of mobile operating systems is the consequence of years of intense competition. Currently, there are two main, well-established platforms: Android OS (Google’s mobile operating system), which runs on a variety of hardware including Samsung, Xiaomi, and Huawei smartphones, and iOS (Apple’s mobile operating system for iPhones, with several branches including the ipadOS for iPads and the watchOS for Apple Watch). There’s also Windows 10 Mobile, although that has less than 1% of the market share in the US and the same percentage is under 10% if we consider other markets.

See also  Don't search these 4 things on Google, it will be a huge loss

The complexity of the software varies according to whether it’s only for Android or iOS, whether it’s native or hybrid and the variation in the complexity of the project has an effect on the developer’s cost. Besides, every company has a different use case. This may affect its choice of choosing a specific type of developer or development framework. So it is extremely important for a business to have clarity of its requirement in order to take an informed decision.

Why Is An Electronic Signature Crucial?